I didn't blast any masters yesterday, but I like the term. Because of the no-heat-in-the-house thing, I meant to get out of the house and hang out in a Starbucks all day doing work or something, but I just never managed to leave. So, I spent all day freezing cold, and I'd woken up with a sore throat, and by the time I made it to Weston to get ready to race, I had some serious chills and shakes. I wasn't sure if this was a fever coming on, or I was just being wimpy, so I decided to go do a warmup on skis and see what happened. The warmup didn't make me feel any better, but the chills sort of went away, just aches remaining, and I figured maybe a race would blow out whatever was going on with my body. I also discovered that my skis were butt slow - its been so cold that the manmade stuff at Weston was actually acting like real snow, and I certainly wasn't waxed for that. Usually, in the sugar, wax doesn't matter, but Tuesday night it made a difference.

I lined up a little back from where I was finishing last year, but as I felt like a complete pile of dog poo, I didn't want to have to start too hard. Off we went, and for most of the promenade lap I was passing people, but going into lap 1, I realized I was burning too many matches, and had to back off. I felt alright, skiing, but pretty weak - every pole plant made my head hurt, and my feet were frozen, but it was ski racing, so things like that don't bother you too much. Anyway, at some point Blazar passed me, and in his draft, I could keep up on the downhills. Otherwise, I would just get dropped. Eventually he started looking behind him for me to come around, and I did a jerk thing and attacked up Mt. Weston. That put Blazar to the back of the pack I was with, but I couldn't hang onto my own pace, and slid back some more, after little Zoe, a J2 I coach, took off the front.

Lap 3 I was starting to hurt for real, and not just because of slow skis. The fact that I haven't pushed myself to ski race pain yet this winter was catching up, and my body didn't know what to do with itself. Also, having my feet be frozen was causing my left shin to cramp up, and when that shin goes, there is nothing I can do to make it relax. It basically disables my entire leg, not cool. I should learn to better manage my cold feet. So yeah, the third lap was a sufferfest, and two guys broke off the front of the pack I was in, and then two more passed me on the last uphill. I rallied with a sprint past one guy (Alec, I guess, looking at the results), but the highschooler kid who'd passed me on the uphill kept his lead.

Definitely NOT my best showing at a Tuesday night fight ( results), and I have since concluded that ski racing doesn't make your headache and aches and shakes go away. But the good news is that I didn't wake up with a fever this morning, and actually feel pretty normal, so it seems my plan of racing away the sickness worked. Woot. 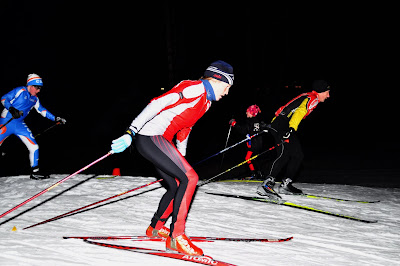 Early on, before the pain sunk in. Jamie Doucett was out there taking photos, blinding people with his flash, and got some of me. 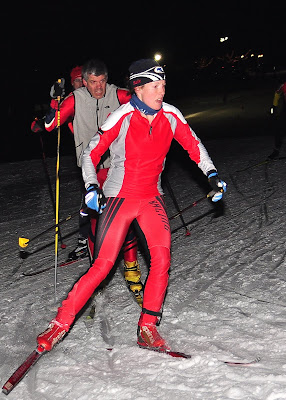