I decided not to race at nationals this year, mostly because I'm not in shape for it (I flunked the double pole test), but also because its not worth getting a stupid USSA license for three races a year. But, a couple CSU juniors are up here, and Rob assured me that I wouldn't be useless if I came by, so I've been hanging around, doing some cooking, some cleaning, some waxing, some skiing, some coaching, and a wee bit of work unrelated to skiing, of all things. Its not a bad life.

The first race was Sunday, and I missed that one. Monday we headed north to Rangeley, which has snow, and that was some nice skiing. I attended a technique clinic with Janice Sibilia and Matt Whitcomb in the afternoon, and while it was nothing groundbreaking, it was still informative. That wasted much of Monday, and Tuesday was spent skiing with the girls and testing wax. Wednesday they get to race, and I can't wait to bring my cheering voice! I'm leaving after the race, to head back to VT with Ed. Vacation is almost over... and I'm actually looking forward to being home, and acting boring, for just a little bit. 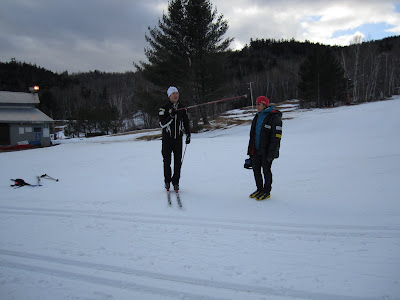 Matt and Janice giving a clinic. It was pretty windy, but the 100m area we were on was perfect for what we were doing. 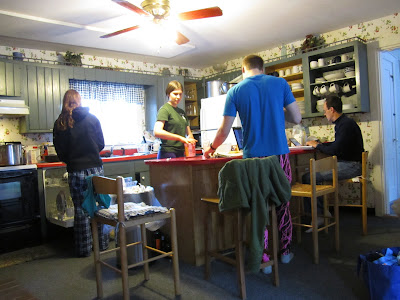 The CSU house is a rambling farmhouse, and there is lots and lots of room for people. Also nice to have a big kitchen. We've been mostly sharing the cooking duties, although I'm doing my best to keep the kids off their feet. 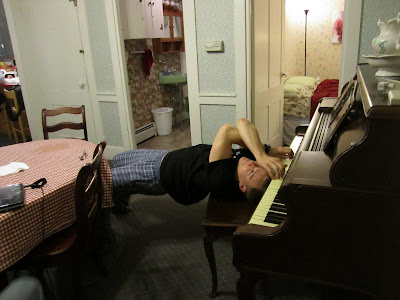 Chris is talented - playing the piano upside down. 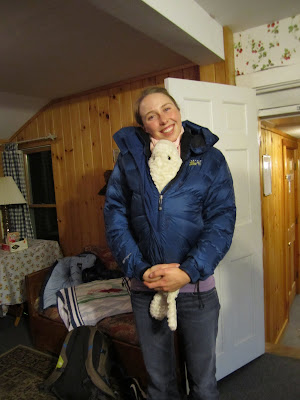 Erin travels with a stuffed codfish. In her jacket. Poor Erin had to leave Monday afternoon, because her grandmother, who she is super close to, got sick, and it sounds not good. Its awful when real life interrupts ski life, I hope things work out. 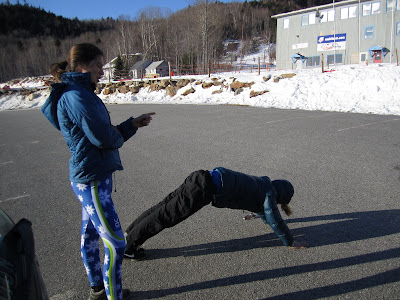 Cate has a problem with saying "like" too much. So, she accumulated 5 pushups for every time she said "like" on the way over to Rumford. After deciding on that, Cate was strangely quiet for the rest of the ride. She still managed to accumulate 55 pushups by the time we got there. Hannah is a tough taskmaster.
Posted by Alex at 10:49 PM