Weston and CSU ran an Eastern Cup last weekend. That's a big deal, because you have many skiers, and they're all fast. Luckily, Amie Smith did a fantastic job organizing the volunteers and making everything run super smoothly, and I was wicked impressed, as both a coach and as a racer. I decided to race, since they were two skate races and we had the full CSU crew on site, meaning I was basically redundant in the wax tent. The morning was a prelim-only sprint, and the afternoon was a 6km mass start. Short distance mass start races are almost guaranteed chaos, so I was pretty excited about that one.

The sprint prelim went pretty well. I was definitely starting to flag out on the flats, I could tell that I wasn't being quite as powerful in my V2 as I should be. I'd started 15s behind a Dartmouth girl, and while I was making up some time on her, unless I could will more speed out of my body, I wasn't catching her. You know when you're finishing a race and your arms are so flooded with lactic acid that you can barely get your hands up? That was how it felt. Slowest finish sprint EVAR, at least that's how it felt. It was still good enough for 10th, but Corey put something like 15 seconds on third place, basically we got it handed to us.

After cooling down from the sprint, I realized I had a bad race hack going on. My lungs haven't burned like that all season! Clearly I haven't done enough Tuesday night fights. Come time to warm up for the mass start race, I wasn't exactly feeling peppy. I consoled myself by imagining that everyone else was tired, too, and after a barely adequate warmup, I got to my start position, elbows sharpened. 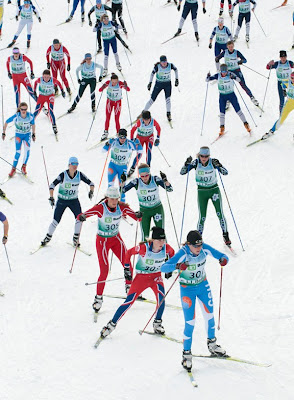 I was in the second row, which was great, since there were lots and lots of people. Got a decent start, and then got a bit boxed in as we headed out into the flats. At this point Corey was in front, and she was looking to not be in the lead, but nobody else was stepping it up, so the pace basically stopped. Accordion time! This was good news for one of my skiers who is on the bubble for JOs - Olivia had had a horrible start spot, but was able to ski her way right into the top 15. Finally Anya Bean from UNH took the lead, and we started skiing again, but at this point we had 40 girls trying to fit into the space where 10 would fit easily. It was tight skiing, with a lot of contact. I was being pushed and bumped and kicked and poled pretty continuously, and dealt my fair share of elbows as well. I was still stuck near the middle of the pack, unable to move to either side, and while this was great from a hiding-from-the-wind perspective, it meant that I couldn't move up or back very easily.

I got loose as we started down the little hill towards the stadium for the first time, and moved to the outside, anticipating the accordion effect that would bog up the inside of the corner. Nobody went down that I could tell, but I certainly picked up another five places, and with my head up, I could see more carnage in progress on the uphill. Looking ahead meant that I could pick a better line, and I moved around the people who were tangled up on that inner hill, moving into a good position as we looped around onto the flats by the river. I was entertaining thoughts of moving to the front of the pack and pulling for Corey for a bit, skiing really comfortably where I was, but down by the river there is no wind. We came through the middle hills, and back around past the lodge, to start lap 2, and I liked my position. I also liked how I felt - skiing in control and well within my comfort zone.

Then going up Mt. Weston, I did the rookie thing and got my ski tangled with someone else. Dammit! I can ski this stupid hill just fine when its narrower and softer and the folks around me are flailing masters, but put me on Mt. Weston when its hard-packed, wide, and the skiers around me are the best for their age in the nation, and I get tangled. Grrr. A stupid mistake, and it cost me a few seconds, which equates to a fairly big gap, with many people gapped behind me, including two of my J1s. Out into the flats I started bouncing from skier to skier, trying to gap back up to that lead pack, but then we turned the corner and I discovered that the wind is a cruel mistress. Instant slowdown, and all of a sudden the morning's efforts caught up to me and slammed me backwards. My upper body was so tired I could barely get my poles up, and my legs were just burning. Emily Nice, a J1 from Ford Sayre, took the lead, but I was unable to get in line, and labored in the wind for a while longer, before falling into the last spot in that pack. The pain of racing had caught up, and it stole my motivation from me.

I basically hung out at the back of that pack for a while longer, suffering all the effects of caboosing it on a transition-laden course, and finally made some moves as we re-entered the middle section of the course. My skis were moving faster than the other girls', especially noticeable on the downhills, so I used that to eat up some more places. I watched one more girl get skied over on the last uphill, and then had a deja vu of the slowest finish sprint ever. Weston is a tough course, because there is just no rest for the weary, and the wind exposed my lack of race fitness. Although I ended up 19th, I was unsatisfied with the result. But racing is racing, and high-contact mass starts are part of the game. 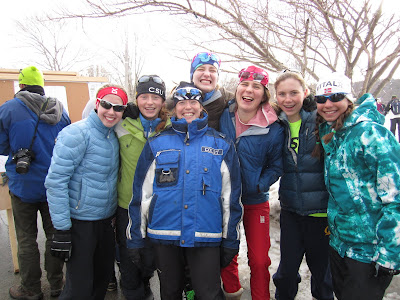 Some of the CSU ladies. 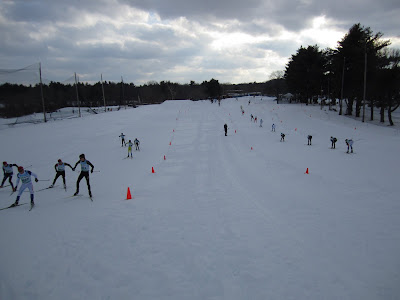 What goes up, must come down. I loved the manmade additions to the course, I've never seen Weston with legit hills before! 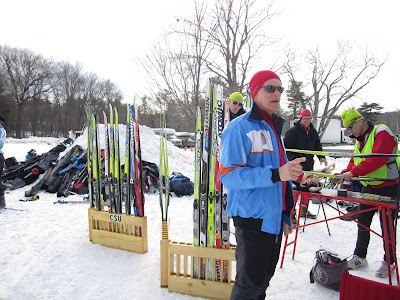 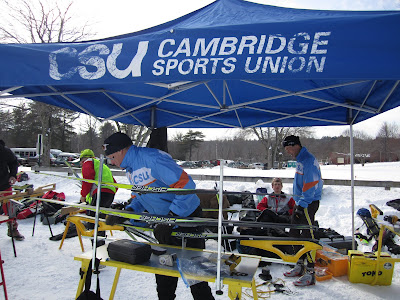 Super-PRO waxing setup, we had some good skis out there. 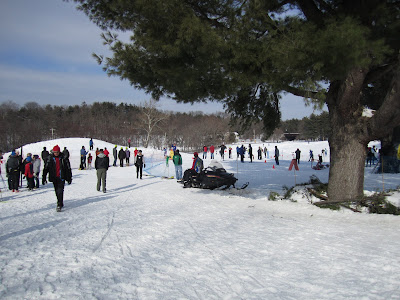 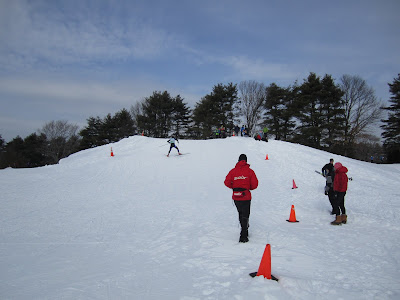 The famed Mt. Weston was tamed for this race - they widened it, flattened it out, and removed some of her crest. Still a good hill, but not as bumpersticker-worthy!
Posted by Alex at 7:41 PM