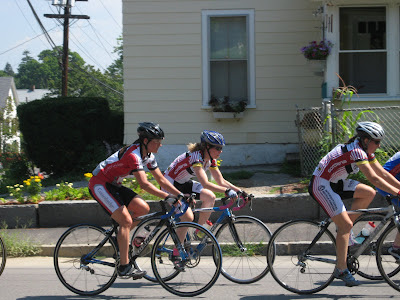 So, I've been kinda sick all last week. I just found out something I already knew: racing doesn't make you get better. Even road racing, which is pretty darn easy on the intensity scale of things.

This past saturday was the Concord crit, in (you guessed it!) Concord NH. I did this one last year in the P/1/2/3 field, because I had a collegiate license and they didn't care what cat. I raced in. I got kinda shelled in that race with like 5 to go when my legs cramped up. Similar to last year, this year's crit was wickid hot, although there was a faint breeze out of the north, but this year I drank a lot of gatorade. I was in the cat.4 field, since I have an official license now. I gotta say, its kind of nice racing with the 4's. It was really easy to control the whole race. The 4's from my team were me, Julie, and Giulia, both of whom need like two points to upgrade. We decided that Giulia should win, because she needed more points, and Julie would be the leadout person, since she'd still probably finish pretty high after leading out Giulia. I was just the person who would tire out the rest of the field with attacks...

There weren't too many starters, maybe 20. The 123 field looked a lot bigger, and we had a bunch of girls in that one. They ran both fields at once, but it was pretty clean when the fields passed each other. My legs felt like absolute poo warming up, so I wasn't sure how much attacking, not to mention just hanging on, I could do. We started out and Giulia immediately went to the front. The first lap or so was pretty quiet, not much going on, nobody wanting to make a move. I was getting bored. Second lap, Giulia put in a slight move on the hill, and strung out the field a little bit. I countered on the back stretch of the high point of the course, and we were pretty strung out through the downhill corners. Next lap, Julie attacked. Strung out the field again. Next lap, I attacked. Then I started attacking each time I hit the hill, just because I was bored and it was too easy. My legs didn't feel good, but with the exception of my team, the people we were racing against just kind of sucked.

At ~9 to go, they rang the first prime bell. I figured, what the hell, noone else seems to care about racing, I'll try and take this. So I attacked with a purpose up the hill again, stringing them out and actually creating a small gap. I put in a good effort and had maybe 10 feet on the pack going down the corners, and I think Giulia and Julie were blocking a bit coming into the homestretch, although a couple people got around them. This is not a typical way to win a prime--you don't just go hard with the pack right there, because they'll pass you after resting on your wheel. Well, these girls were either scared of the wind or slow, so nobody passed me. God forbid that they should have to work!

I recovered well after that, and we just started attacking again. There was supposedly another prime in there, I didn't notice, but Julie said that Giulia won it, I was second, and she was third. I like it when that happens. Finally with three to go, the pack was down to ten. I strung us out pretty well going up the hill, and the Giulia counter-attacked, and Julie and I discussed some tactics for the last lap as we recovered in the back. I rested up until the last lap, and then put in the most disgusting attack I could muster at that point, pulling it out until we hit the first of the downhill corners, when I let Julie take over to recover for a sprint.

We came into the last corner, and I was on the outside, where I had been all race, because it was easier to pedal through it and keep momentum without busting ass to sprint back up to people. Someone on the inside wavered, caught handlebars with the Julie, (Giulia was in front of this), and they went down. This part was almost slow motion. I knew they would domino into the next girl, so I started moving outside trying to get around them. The girl next to them went down, into the girl next to her, who sprawled across the pavement in front of me. I tried to go more outside, but there was no more outside to go, and I was rubbing against this monster curb that I bet even Colin couldn't have jumped. I half hoped to be able to ride it out, but I had far too much sideways momentum, and so I ended up bouncing along on my head for a couple feet until I finally came to a stop. I was up pretty quick, and after deciding that I wasn't nauseous and I could remember things, and all my limbs worked, picked up my bike. Front wheel wouldn't roll, even with the brakes open, so I shouldered the damn thing and walked it in. I think it was Boobar who said he wished he'd had a picture of my face as I was walking it in. That still got me 6th place, so I guess we'd whittled down the field enough, but man was I pissed. Now I gotta buy a new helmet, dammit.

But, Giulia still won, and Julie was mad enough that she won the road race on sunday, so it all works out. Plus, we got money and schwag from primes and the win, so thats always nice. My front wheel is pretty FUBARed, since the rim is kind of bent, but Boobar was able to true it enough that it would roll on sunday. Some of those spokes have absolutely zero tension right now though. I had previously had to replace every spoke in that wheel due to a combination of last year's concord crit when a girl tried to put her derailleur through my wheel and kinked every spoke on that side, and when the airlines mangled the other side flying to France. So, now the rim is bent. Who wants to donate a wheel to me? 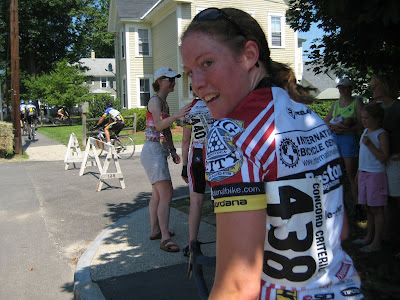 This is me walking around after the race. I don't look too happy do I...
Posted by Alex at 9:22 AM

Yeah, see, that's why I mountain bike. At least all the shit I break is my own damn fault.