Jess and Alex go on a Vermont adventure 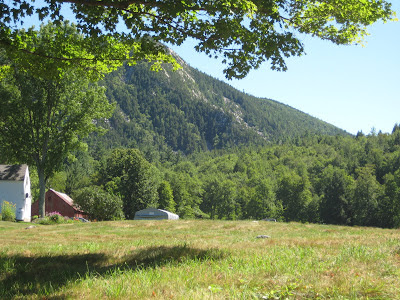 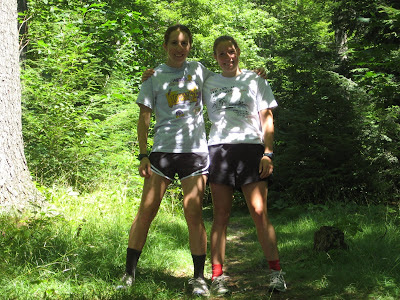 After the Concord crit, Jess Snyder and I drove to Vermont, to get her skis evaluated by Zach Caldwell before he goes west, and then to do some serious ski training. We decided that the best plan would be to do a super duper long distance workout, because thats kind of fun, in the twisted skier's mind. So, we decided to start with a run, then ski, then bike to finish off as many hours as we needed that day. The run section vaguely followed this, over the top of the Peabody-Holt mt saddle, onto the Catamount trail, hitting up with the Danby road in the White Rocks Recreation Area, and then down down down down down into Danby. We stashed our skis by a dugout in Danby, and then skied along these roads, mostly uphill, through Walingford, East Walingford, and to the top of the pass into Weston. There, our bikes were locked to a tree by the side of the catamount trail again, and we switched out equipment again and biked home (route). 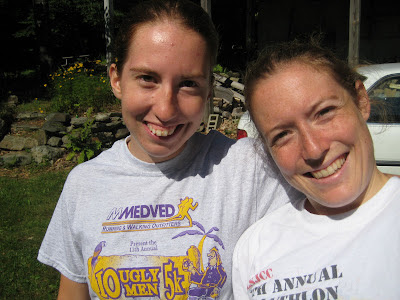 We drove the loop before we started to put all our stuff in the right places. Mostly, we were just worried about having enough food. It took about an hour and a half to drive the whole thing, since we were going to be covering about fifty miles (on foot). The run started out in the shade, and we were up pretty high in elevation, so it wasn't too hot. Jess wanted me to remind her to drink out of her waterbottle enough, so I made loud, obnoxious slurping noises every time I was planning on taking a drink. It worked pretty well. We came over the top of the saddle between the two mountains, and descended into Green Mountain National Forest. 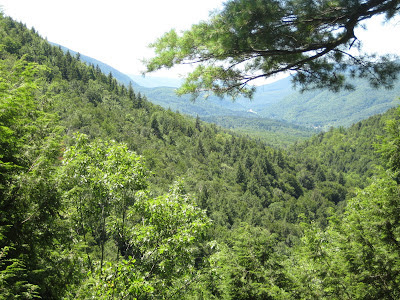 The part along the Catamount trail is gorgeous, and there were no bugs. Eventually we had to negotiate a little beaver dam damage, but otherwise the run went smoothly. Coming out of the woods onto the Danby road, we were still in the shade, and we started taking some "action" shots. 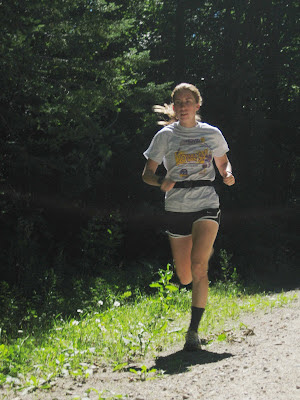 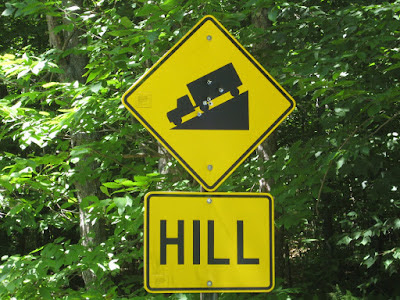 When the road turned from dirt to pavement, we knew we had come to the downhill section, and for about 20 minutes we went steeply downhill. Eventually we crossed a stream, and temptation was too strong; We took a five minute break to ice our lower legs and refresh ourselves before skiing. 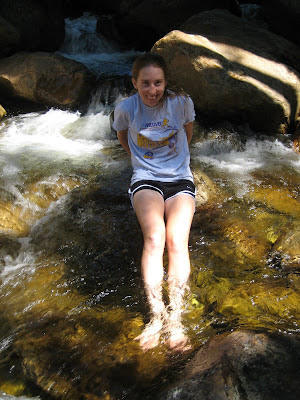 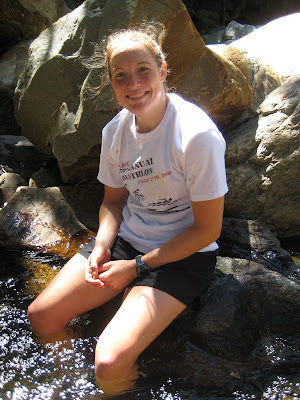 We got to the dugout, and the skis were still there! That is step one. Got on the skis and started out north along rt 7, which is pretty flat, so we did a lot of double poling at first. Eventually we got into Walingford, and wasted a good 10 minutes searching for a place to fill up water bottles there. I guess being sick has its advantages; you're thirsty all the time, so you drink a lot. I always felt like I was full to bursting with water and gatorade, which was mostly a good thing.

The ski soon started uphill along a really pretty river on rt 140. It was still pretty shady, which was good because it was really hot down there. I should mention that we were trying to carry our running shoes with us on the ski, so that we wouldn't have to return to Danby (its harder to get to than the area where we dropped off the bikes). So, our waterbottle belts were so heavy that it took me a good 20 minutes before I felt comfortable enough to stride. We had water bottles, gu, bars, gorp, two shoes, sunscreen, a camera, money, and a shirt, all tied around the waist. Although a little bulky, it was less cumbersome than I would have thought. 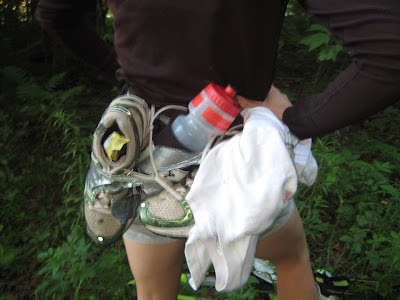 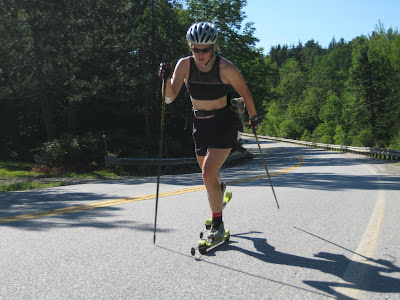 Eventually we got up to East Wallingford, and after some more "action" shots, realized we were out of water. There are no gas stations or general stores in this town, so I was worried we would have to do the last eight miles or so without water. Luckily, there were a bunch of rednecks drinking beer on a front porch, and they were more than willing to give us water. "DANBY??? You came from DANBY??? Sheeeit, ah spent all day on a roof, but you rode in from DANBY!". They seemed suitably impressed, but it may have been the sports bras. 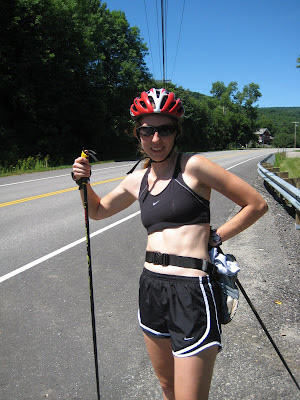 After a long stretch of stride-able uphill, we were finally at the bikes. We had been pretty good about being level 1 nazies, but we were still tired from running and rollerskiing for almost six hours. 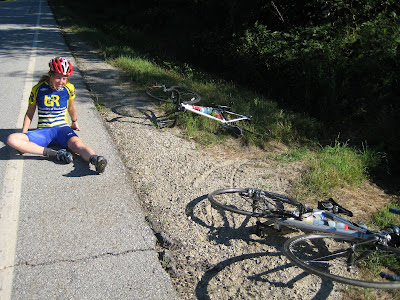 We decided that the prudent thing to do would be to just go back home, rather than try and fit in a real ride, since we wanted some dinner and Jess had to drive back to Rochester that night. All in all, it ended up being about 6.5 hrs, most of which was skiing and running. Great day! (although my head could definitely have used some more ibuprofen at some point...) 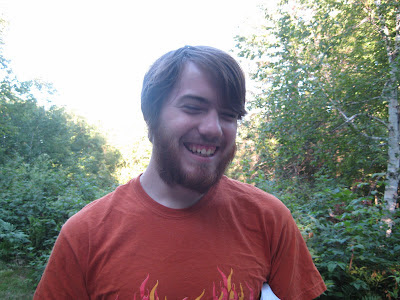 Here, Ed laughs at us as we try to explain what we just did... for fun. 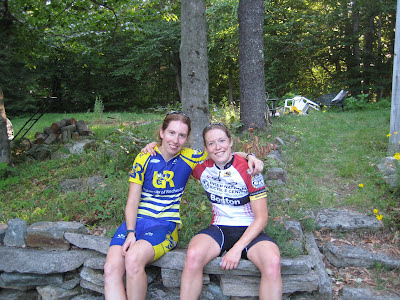 do you need a front or a back wheel for your bike?

i may be able to help you out