Last weekend was the annual Pawtuckaway Camping weekend, hosted by UNO, but I also wanted to fit in the Quad Cycles cross race and coach a practice for the CSU juniors. I signed up for the B women's race, since it was earlier in the day, and that wouldn't give me time to orienteer in the morning, which I figured would be bad for my knee. Who else signs up for a race in order to keep themselves from doing a different type of race on the same day? That makes sense to me. I might have a problem.

The Pawtuckaway day was super fun, I got to spend all day outside playing! Ali and I arrive around 11am, and I started with a normal orienteering course. Because I banged up my knee, I chose to do one of the shorter courses, the green course, at 5.5km straight-line distance. It was a fun little course with a butterfly loop, but Pawtuckaway being Pawtuckaway meant that the navigation was tricky and required a lot of concentration. By the time I was nearly done, I was feeling like I knew what I was doing, but by then the course was basically over. I ended up third overall, behind Tim Parsons and Steve Olafson, both fast guys who know what they're doing, so that's fine by me. Below is the map from the course, we had to copy our own maps, which is why its a bit sloppy... whoops. 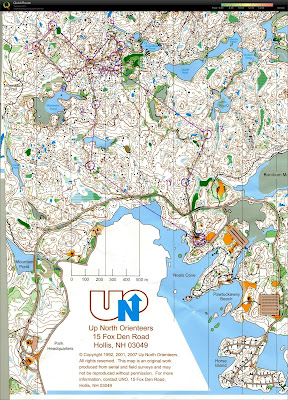 When I got back, I availed myself of some of the watermelon on the snack table, and then scavenged for a canoe and a partner for the canoe-o. Neil Dobbs, an Irish orienteer who I met a couple winters ago in Sweden, was willing and ready to take on the canoe-o challenge, and I borrowed Adrian Owen's canoe, and we were off. It turns out I'm not very good at steering, and Neil wasn't much good at paddling, but we got all but one of the controls, and came in under the hour time limit. We got spanked by Ken and Ali, who had A) kayak paddles, and B) an ex-olympic-level rower in the boat... we also got beaten by Kestrel (Adrian's son, can't be older than 10) and Allison (his mom). Well, maybe canoe-o isn't our thing. Below is the map - we got all except #10 (order: 1, 2, 6, 7, 8, 13, 12, 11, 9, 5, 4, 3, 14). 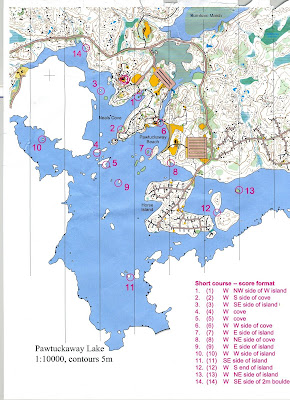 After the canoe-o I had some much-needed lunch, and attempted to drink away my dehydration headache - it was hot and dry, and I'd been sweating in the sun all morning and not drinking enough water. But water is for pussies! I had a mountain bike orienteering race to do! Steve and Tracy Olafson, of racingahead.com, had set up a mountain bike orienteering course, for adventure racers. If you were on a team, you could also do an orienteering course and the canoe-o course, and they'd tally up the scores. I didn't have a partner, so just went out to do the bike-o solo. The winning time right now was 1:42, by the EMS team, so I knew who I wanted to beat. I did have the advantage of having a fair bit of local knowledge of the park, and also Steve had mentioned a couple changes to the map that really helped out with the navigation. Below is the map, and as you can see, either my GPS track is way off, or the map really is just a suggestion of reality: 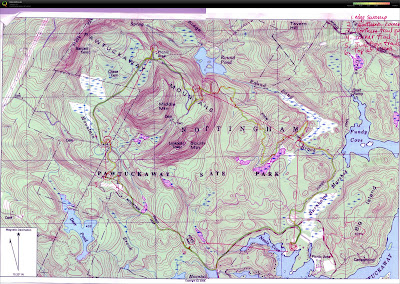 I was operating on local knowledge to #1, no issues there. Then the trail got super technical for a while, that was fun, but it was hard to ride smoothly. By the time I got to 2, I was thinking that it was taking me too long, but it was mostly downhill from there. I spiked 3-5, and then it was all downhill to 6, on trails I knew, and I was loving it. Lost about 5 minutes searching the various knolls for the control, but once I had it I knew I'd won the race, since I was at 1:24 or something. The EMS adventure racing team was none to pleased to be beaten, they took it quite personally that Steve had mentioned to me about the map changes near #2. hehe.

So, I made it back in time for the potluck dinner, and managed to drink about a gallon of water - those dehydration headaches are not fun. Apparently biking is just within the range of motion that makes my knee hurt, because it was starting to throb a bit, but I couldn't let that deter me from the wicked hard night-o. But that is another post, I think. What a fun day!
Posted by Alex at 10:02 PM