I was biking down the street the other day, watching this slightly overweight, very clearly non-athletic girl jogging. My first thought wasn't "good for her" or something else charitable, it was a purely selfish "How come she can jog down the road and everything is fine, but I, an athlete, can't run without hurting myself? I didn't even do anything out of the ordinary to get hurt!" And that was when it struck me - my ordinary is not ordinary. And it's not working for me. Injuries don't have to be a fact of life, and this is totally news to me. My other big lightbulb of the week was when I decided that I shouldn't start running until I can press on my kneecap in the hurty spot without having it hurt. Normal people probably think that's obvious. For me, its like discovering a whole parallel universe.

Since the Pawtuckaway camping weekend, which definitely set back my recovery, I'd say I've been pretty intelligent about things. I've been religiously icing twice a day, not doing things that hurt (that's a HUGE step in the right direction for me), and doing the physical therapy the doctor prescribed. So good at following the rules! I decided it was time for a test. The month of October is full of national-level orienteering races, and I want to be able to race - maybe not as fit as I've ever been, but at least rested and healthy. Who is this person who has taken over my brain and replaced it with a rational one?

There was a local NEOC meet on Saturday at Hammond Pond, which is literally right down the street from us, so we headed over, Ed with plans of racing, me with plans to aggressively hike it and see what happened. The vegetation was pretty thick, and folks who had already run were warning us that it was a very physical course, even though it was short (3.0km straight-line), due in no small part to the sunny day and temperatures in the 80s. I started out hiking, luckily the first control was up a hill or I would have been super tempted to run. It was easy to read the map very clearly at a hike, and for the most part I was moving really fast - around a 15-20min mile - that's fast for a walk. I decided that since I wasn't moving fast compared to the runners, I would try to take the straightest line I could between the controls, and succeeded pretty well with that. There were three sections of trail where I did break into a limping jog - its a limp because I was trying to not bend my knee, and as long as there is nothing to trip you, that's a viable way to run. 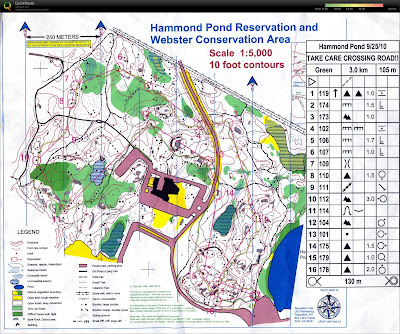 I lost maybe 45 seconds over the whole course - very clean, which is to be expected if you're moving slow enough that reading the map in detail is no problem. There is also the consideration that I have run at Hammond Pond a LOT, so I definitely know the park well. The clean run put me in 7th overall, out of close to 40 competitors. Results. Ross won the course by 8 minutes over the next competitor, which goes to show that this wasn't a national-calibre field, but after Ross the times were pretty close. I'm not sure how much faster I would have been if I could have run - sure, I would have been moving faster at times, but I also probably would have made more mistakes. And the thick, physical forest was easier to move through knowing that I couldn't go any faster than I currently was, rather than trying to bust through it at race pace. I still managed to work really hard! And most importantly, my knee was perfectly fine at a hiking pace over rough terrain. This bodes well for the Hudson Lowlander that I'm doing next weekend. The plan is to hike everything except trails and places with exceptionally good footing, and I think if I can keep up a 10min/km pace, I will do quite well.
Posted by Alex at 10:33 AM