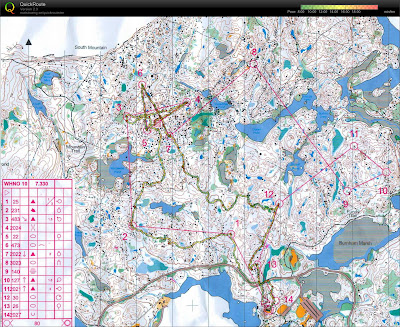 One of the traditions of camping weekend is the Wicked Hard Night-O (WHNO). Apparently it used to be the world's hardest night-o, but that title got taken by a different race. I've never done the night-o at Pawtuckaway before, because Pawtuckaway scares me, but I did do a night-o here back in April, so I wanted to tackle Pawtuckaway at night in a more race-like situation, i.e. occasionally alone and sometimes lost.

This might have been dumber than I originally thought, based on how the knee felt afterwards, but it was fun, and although I'm definitely not over my deep-seated fear of orienteering at night in Pawtuckaway, this helped. I started out with the group, and I didn't really like being in a pack, so decided to do my own thing to 2, but started drifting left - not horribly, but enough that the stream of lights was heading to my right and I was losing contact with them. After a few minutes of this I was completely freaked out, not in contact, not sure where I was, not sure if I'd overshot the control, and I made a mad dash for the lights, arriving breathless and terrified and SO glad to see people! Minor meltdown. Turns out I was just moving a lot slower than I'd expected, even though it felt like I was moving pretty aggressively.

Arrived at 2 ok, and decided to do my own thing to 3, and headed a bit right of where I knew Phil and Peter were going. Crossed the trail, ran along it for a couple steps, then headed for hopefully the marsh, to bounce off of it. Never hit the marsh, and when I started heading steadily uphill, I decided I'd gone too far. Not in great contact, I'd mostly just been relying on my compass, but clearly not doing that all that well, and after stopping to listen to where the frogs were, I saw a light. Called out for them to ask what number they were going to, it was Ross heading to 5 - he was able to point out more or less where I was, which helped because then I ended up back with the Phil/Peter/Ali train on the way to 3. Yikes, another near meltdown. Definitely a situation where a brighter light would help, because my light just wasn't bright enough to pick out features. I should figure out how to mount my bike lights on my head sans helmet.

After that, the little control pick was much better, I was in contact with my map and there were enough people to make me confident enough that I wasn't going to get eaten by the cackling monster of Pawtuckaway perched on a spectator rock in the middle of the star. (That would be JJ, the course setter, just trying to scare people). I was walking about 3/4 of this, hobbling a little faster the other quarter of the time. By 7 I felt comfortable enough to get 12-13-14 instead of just bailing back (at least I recognized that doing the whole thing was a really bad idea), so I did the long trail hobble to 12, which took forever. Definitely moving slower for the last three controls, my knee was hurting a lot more than before the night-o. Overall, that was a lot of fun - I hope that next year I am healthy enough to run the whole thing! And a brighter light would help a lot, too...
Posted by Alex at 11:03 PM