I was running at Hammond Pond this morning, and I realized that if I wanted to get to work on time, I'd have to cut my run short. Right there I decided that my priorities were totally screwy, and I'd much rather be running in the woods than sitting at a desk, so I kept running. I was orienteering on the Hammond Pond semi-permanent course that Ross had set, and he had emailed out three versions of the map - one with all features, one without trails, and one with only contours. I was using the one with contours-only, which is the first time I've done an exercise like this. 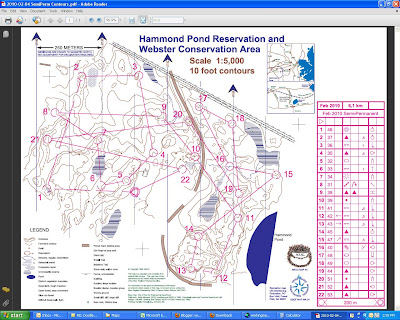 There is a lot of talk, in the orienteering world, about simplifying the map. The theory is that when you are running in the woods, if you try to read every single little feature, it will just slow you down. Sure, on some maps, 1:15k maps for example, or featureless-blueberry-filled-NH maps, there aren't many features, so you won't get as bogged down, but the trend has been towards more and more detailed maps. So, we spend a lot of time working on simplifying the map in our heads, learning to pick out the obvious details and not get hung up on the rest. I'm not very good at this, I think its a subconscious thing where I know I'll get to slow down if I have to read every blip and knoll, so I collect every feature along my route. But it was so nice to run on a map that was already simplified for me - all it showed were contours and a couple marshes. I zipped around that course much faster than I normally would, relying solely on compass and contours. There was a sense of freedom about it, and it put me in a really great mood.