CSU held its second training camp of the spring in Harriman state park, just north of NYC. I was here back in October, at the US Orienteering team's camp, nursing a still-sprained ankle and unable to comprehend the terrain or move through it quickly. I'm not sure I can move through it quickly now, but a winter of orienteering training some some simplification exercises have done wonders when it comes to actually reading the map. 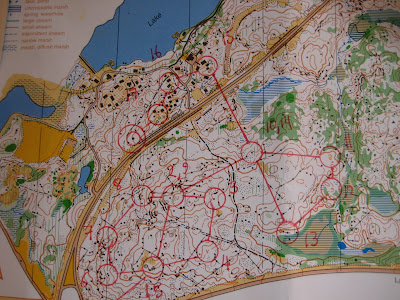 I arrived around 10pm Friday night, with Samantha, Ross, Ian, and Brendan, and we met up with Boris in a parking lot to run the night-o. I was pretty pleased that I could actually run while reading the map here, but we were in one of the nicer, least-rocky sections of the park. The controls were super reflective, which certainly helped, since I could see them from a couple hundred meters away. Above is the course - lots of butterfly loops. From there, we continued on to Bernie Bretton's house, where everyone was crashing for the weekend. Thanks Bernie and Lisa! 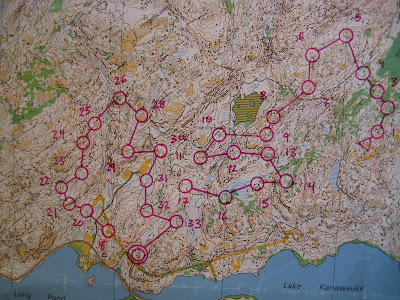 Above is Saturday morning's map - enough controls? The faint orange line is the line-o that we jogged on the way to the start of the first control-picking course. The idea behind a line-o is to follow the line as closely as possible, making sure you're always in contact with the map and sort of checking off features.

The first control-picking exercise went really well for me, I felt like I was always in contact with the map, and moving pretty well. The second course was not so good for me, I was starting to get pretty thirsty and hungry, and starting to make some sloppy navigational moves. About 10 feet from the finish, I hopped over a log, and landed on some loose rocks that turned my ankle, the one that had been sprained last time I was here and that I've been rehabbing all winter. It went crunch, and I fell down, with a couple choice words. Damn, and here I was thinking I was all healed. Luckily, I was at the finish, near the parking lot, and I could bear weight after a few minutes, so I limped on back for lunch. Below is the garmin track from the second control picking: 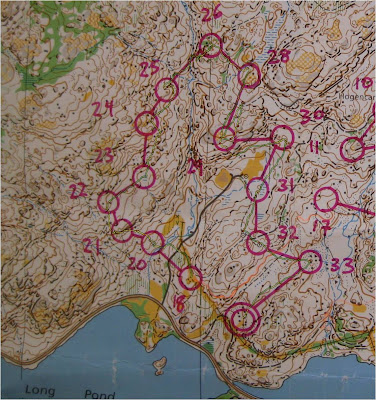 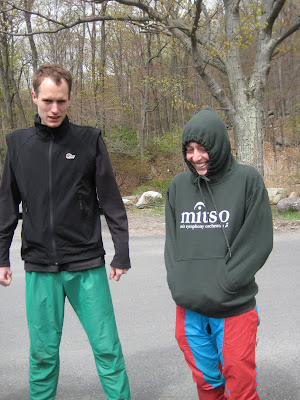 Lori and SGB - it was colder than we thought it would be. Lori also looks like a 10yo kid, which I find fairly amusing.

Saturday afternoon was the first speed session of the camp - intervals in groups of people about the same orienteering speed as each other. I put on my super hefty ankle brace, and with some vitamin I everything was dandy. We started in 15-second intervals, and the idea was to run down the person in front, or run away from the person behind. I was in a group with Lori (and Presto), SGB, Marie, and Becky, and it was super fun to move at that sort of speed with the race pressure of being caught. Below is the map of the six intervals, each of which took 5-7 minutes. The faint orange line is where I drew my route after running, and the green-ish line is the garmin overlay. 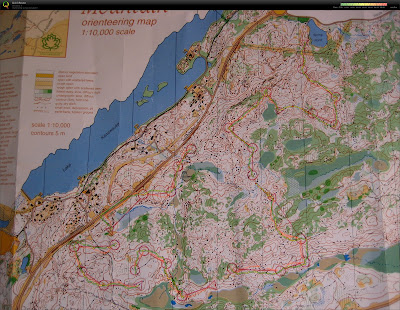 The most amusing part of this exercise was the point where Presto decided that he was too tired to run anymore. Lori was going first, and she dashed off, with her whippet in tow, until she got to a low-lying branch, hopped over it, and Presto didn't want to. He stopped, and watched her take another couple strides. Lori turned and called to him, but he didn't budge, he just looked guilty. Then he trotted back to where the rest of us were standing, and got in line, with his tail between his legs, as Lori had to come back and put on his leash to drag him around the rest of the course. Poor guy was whipped! 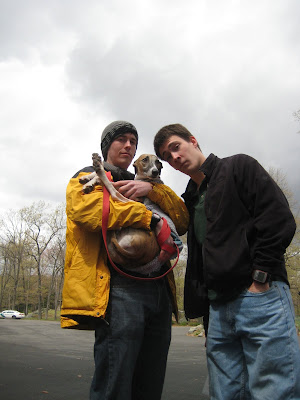 Brendan and Ian trying to look tough, which is kind of hard when you're hugging a whippet who is wearing a fuzzy jacket. 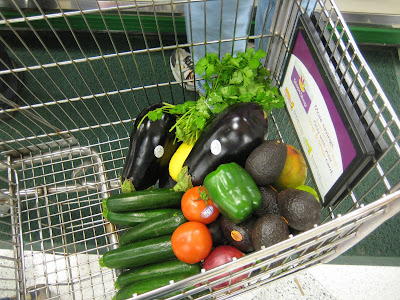 After the O-tervals (ha. ha.), we all traipsed back to Lisa and Bernie's, all 23 of us, I should mention, and Ross led the dinner show. Delicious.

Sunday had two intensity sessions planned, so after some fast-paced boggle action, we all turned in. Funny how spending all day in the woods will tire you out.
Posted by Alex at 8:11 AM