Since Massachusetts got Monday off for Patriot's day (marathon Monday, in actuality), we had planned one last training exercise for the camp - a rerun of the long distance race from some US champs a couple years ago. This was also supposed to be quite hilly, so I figured I'd be doing well if I could keep my time to twice what the men's winner had done whenever they were running this race. Mikkel Platt had won in 71 minutes, so I was hoping for 2:10. Ha. 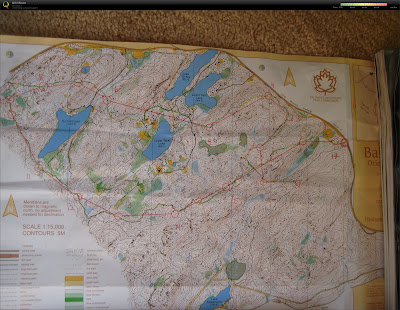 We started in reverse order from the middle, and since Lori, SGB, and Ian (the three people I beat) had gone home, I went first. I started out alright, but then I started having compass problems. It turns out that my compass settles pretty slowly, and you don't notice it if your map has been up where you can see it and are looking at it a lot, but you do notice it if you're slogging up a hill slowly with your hands on your knees and your compass upside down. Weird. Maybe someday I'll invest in a better compass, but this one seems to work for the most part.

Um, this might get long, and boring if you're not into orienteering, because its basically a course analysis of why that run was such a disaster. Just warnin' ya.

I think the compass issues explain the fact that I was 15 degrees off on my way to 2, after a while I knew I was in the wrong spot but it took me forever to figure out where to go. Eventually I was able to deduce that the marsh down the hill from me was very much open, cattails etc, so I ran north, although I still had no idea what I would relocate from, but then I stopped, looked, and listened, and first I heard Brendan and then I saw him, so I went that way and found the control.

3 was hesitant, I was pretty shaken and wondering if I should cut the course short since I was already going on 30min, but then I saw Boris so followed his line to 4, which was lower than I would have gone but worked out well, I think, and forced me to start running again and pick up my pace.

I had compass issues again on the way to 5 - my plan was to go right over the top of the mountain (in retrospect, I'd like to go to the left of the hill), and my compass kept saying I should go more to my right, even though I could see the top of the hill. I ended up skirting the right side of it, and tried to go straight to the control but the compass said I should go more to might right, which I did, and then saw the marsh way to my left, and was like, "compass, WTF?" I'll admit, I was pretty frustrated, my compass was working fine for me the other three days of orienteering, why not now?

Luckily, 6 was mostly a slog along a road and up a huge ass hill, so I had some time to sort out my thoughts, which ended up being that I should finish the course if I hit #9 (halfway point) by 1:30:00. Looking at the route I took, I think I was scared of the hill - I was trying to avoid excess climb, which is stupid because I'll climb that much anyway, should have gone straighter over the saddle. 7 - 8 were fine, just slow, but I was starting to think I'd gotten my feet back under me, even if I wasn't moving fast.

Then I blew 9, I was sloppy and not paying attention to my compass crossing the marsh and saw the little hill after the marsh and made a parallel error, and luckily I saw the trail and corrected. I was there well before 1:30, so I carried on. I was pretty clean through 13, and even running again, this was good!

And then, on the way to 14, I was near the flag and saw a pink streamer on a tree next to a boulder to my right across a wide reentrant. I thought that seemed a bit too far to my right, but still, its a streamer, there aren't that many of those out here. So I ran to it, and carried on to 15, but something was niggling in my brain, saying, that hill to your right is way too big for you to be as high up on it as 14 is. And after a very long while I hit the trail that goes up the hill, right where the cliffs are, and I realized where I was, and that I had not actually visited the real 14, but I just didn't feel like going to the real one at this point. So, I decided to go to 15 instead. But then I got all confused when I came to the point where there is a hill across the saddle to my left, thinking it was the saddle where 15 was, but, I wasn't sure about that, because I hadn't actually been to 14. After some deliberation, I decided to do the prudent thing, and go to the top of the big hill to reattack. I got to the big boulder next to the little boulder, and then went to 15, and that was the end of that disaster of a leg. Phew.

To 16 I was mostly bouncing over the tops of the hills except where I felt like going under the cliffs, and although I wasn't running fast, I was running, and it felt good to actually spike a control. 17 was also fine, and I finished in 2:32. Only 20 minutes slower than I wanted to be. Yargh.

So, not a great way to end the weekend, but I think it shows that my running fitness is not where I need it to be, because when I get tired, I make mistakes, and merely mortal endeavors are making me tired. It's been hard for me to break out of the "orienteering is just a long slow run" mindset, and speeding up in the woods is not easy for me. I'll keep working on it, because while I've definitely seen some improvement over the last three years, my expectations have been rising as well. Damn those expectations!
Posted by Alex at 9:36 AM