CSU puts on eight park orienteering races each spring, in the parks around Boston. These are fun little weeknight training events, and the first one was last night at Fresh Pond, which certainly doesn't have much terrain to speak of, but worked just fine for a 3km course. It was definitely a runner's night, since the navigation was pretty trivial, but Audun Botterud, the course setter, did a great job making the course as interesting as possible. 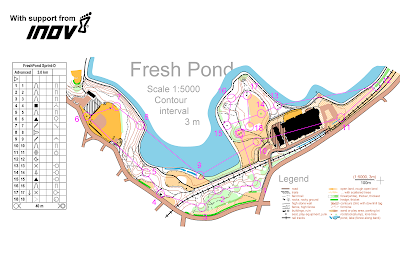 I recruited Tony and Kevin, the Harvard skiers we went to Tuck's with, to show up, and then roped them into coming to the next two park-o's as well, since they forgot their money so I spotted them entry fees, with the condition that next week, Kevin pays my entry, and the week after, Tony pays it. Muahahaha. Ye'll be orienteering whether you want to or not!

I did a nominal warmup, just because I knew the race would be fast and flat, so not warming up would make things more painful than they had to be, and then I started out, about a minute behind Mika Latva-Kokko. Slight hesitation to #1, where I saw Mika already, and then we took different routes to 2, where we met up again. We were together to 3, and then he went up around the road to 4 and I stayed low through the woods. We got to 4 around the same time again, and disturbed some guy who was peeing on the side of the building. I think he was pretty embarrassed to be caught urinating in public, but we didn't care, we just wanted him to get out of the way so we could punch the control. I mean, there is a bathroom not 500m away from you at the water treatment plant, dude, couldn't you just go inside to pee? sheesh.

5-7 were just straight running, and I was a little annoyed at how slowly I was moving for the amount of effort I was putting out, but I was pulling away from Mika slowly. Then I made a mistake going to 8, and went all the way down to the main trail, so that I had to climb back up the hill to get to the control, and Mika was there first. I closed the gap going to 9, and passed him on the way to 10 to punch first. 11-13 was more straight running, this running stuff is HARD! 14 I hesitated a little bit, not knowing which tree I was looking for, but then it was clean to the finish, although my legs were filled with lactic acid, which slowed me down even more. You know that feeling like you're running in water? That's the I-started-too-fast-and-now-I'm-paying-for-it feeling, and it was rocking me pretty hard.

I was feeling pretty good about my run until Ross came blasting through five minutes faster than me. Ouch. Time to start hitting the track if I actually mean to get faster. Results
Posted by Alex at 11:42 AM