The Billygoat is a race that happens once a year, and is definitely one of my favorite orienteering races of the year, mostly because of its inherent goofiness. You can follow people, in fact, its recommended at times, and you can skip one control, of your choosing. The Billygoat also is generally very hilly, and fairly long. Phil Bricker, the head goat (other races call them race directors. At the Billygoat, we call them head goats), decided that he wanted to have this Billygoat win the record for the hilliest Billygoat ever, so he planned a course with 680m of climb, over 11km. That is a lot of climb. The course involved a lot of stumbling and slogging, depending on whether you were going downhill or uphill. Combined with a hot, muggy day, it was a hard race.

The Billygoat was held at Mt. Tom before, in 2004, when Will Hawkins of CSU was head goat. That was my first Billygoat, and I came in well before the 3.5hr cutoff, earning my t-shirt. Looking at the results, it appears I just followed a reliable group of old-but-accurates, finishing 68th. It was an enjoyable introduction to Billygoats. The year after, however, (2005) was brutal: First hot day of the spring, too long, too hilly, a breakfast of 2 brownies and a redbull, a horrific bonk, and I finished in 3:34, just missing out on the t-shirt privileges. My only overtime Billygoat. This past Sunday was my fifth Billygoat (I missed the one in 2006, I must have been graduating or something on that weekend), and by far my best.

I drove out to Amherst on Saturday with Presto and SGB, who was in charge of Presto for the weekend since Lori was at the US Radio orienteering championships. And you thought Ski orienteering was obscure. Anyway, we trained on Saturday, spent a very nice evening at the Gagarins' house, and arrived at Mt. Tom rested and ready to go. Ed came Sunday morning, after working on rollerski stuff all Saturday, I think I know who had a more enjoyable Saturday. SGB wasn't racing, after hurting himself while finishing 4th in the Seven Sisters trail race, so he just took Presto on a very long walk and took my camera. I was hoping for a photo of the view from the ridge, but I guess he never went there. 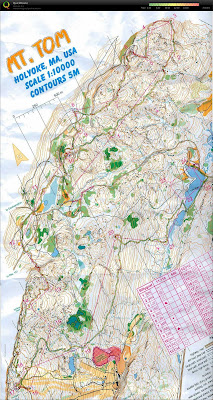 Course, with my route overlaid. Green is 5min/km (8min/mi) and red is slow. I'd rather not say how slow, but lets call it walking pace. 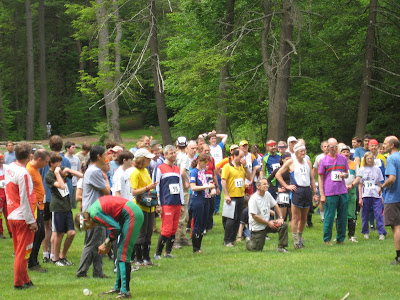 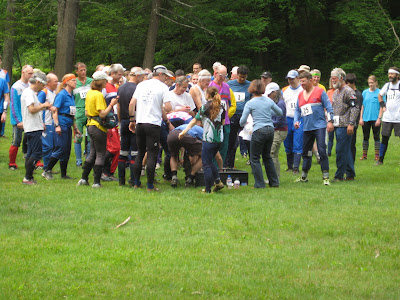 Everyone rushes to get their map, even though you can't look at it until they say go. 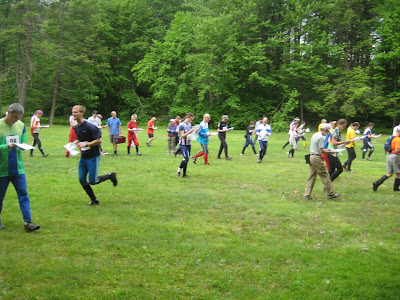 And then the start is pretty anti-climactic. Some people dash off (with many in tow), hoping someone else will take the lead and show them where to go. Some people dash off and know where they're going. Smart people will stand still until they have found #1 on the map and have a plan for getting there. Others will start walking in the general direction of the dashing-off-people while figuring out where to go, then give up and sprint after the people already running in (hopefully) the right direction.

My race went well. I blatantly followed Ernst Linder (he is quite experienced, and smart enough to navigate to the first control on his own rather than following someone else) to 1, dropped off the pace a bit to 2, still following, so that I could pick out which control to skip. I had sort of decided on 6, since it saved a bunch of climb, but it turned out that was also a water stop, and I was projectile sweating, so I chose 15 to skip instead - it also saved climb, and would give me a sweet trail run with a nice view. Once I decided that, I started navigating more on my own, sort of in the midst of a loose group. As the race wore on, there was some movement in the pack, and I was slowly working my way towards its front.

The hills were just as hard, steep, and rocky as promised. The first part of the course felt like a whole lot of uphill, and I was slogging along dripping sweat for most of it. Luckily the navigation wasn't too hard. I couldn't get enough liquid into my gullet at the three water stops, but I was acutely aware of the folks behind me needed just as much if not more water, so I tried to limit myself at the unmanned stops. It was hard.

The race was clean until I bungled a supposedly clever plan to #20, and lost about 5 minutes to the guy I'd been running with. A guy who had just done an 18hr adventure race the day before. If I'd just stuck with him, I'm pretty sure I could have taken him in the sprint. But, that's what you get for trying to be clever near the end of a 2hr race in hot weather. I eventually finished, and while it felt like a long slow slog, I think others were just as affected by the nasty hills and humidity, and I was the 3rd woman and 21st overall. This means that next year, if there are at least 21 controls, I will get my initials as one of the control codes! Quite exciting.

Ed came in not too much later in just under 3 hours, utterly drenched in sweat. He does even worse than me in hot weather, and my only consolation for how stiff and sore and tired I feel today is that he is in worse shape. 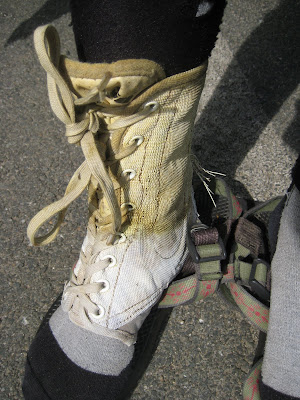 Do you think this thing is washable? 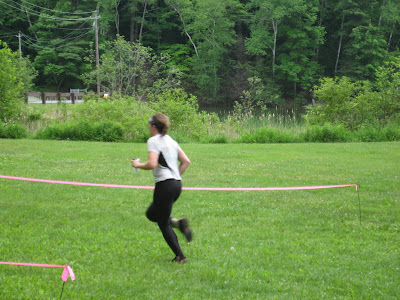 SGB caught me in the finish chute. I tried to run faster, but an 8min/mi was about all I could do. Those rocks and hills were brutal. 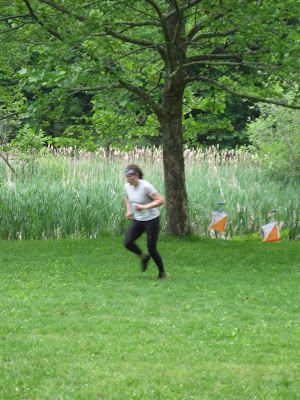 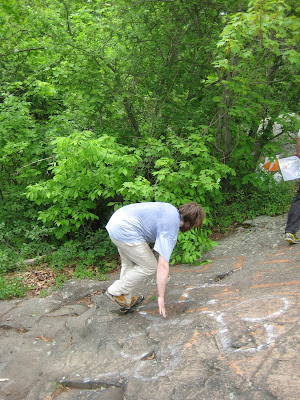 Proof that Ed is actually a gorilla. Or just so tired that when the hill finally flattened out he still couldn't stand up straight. 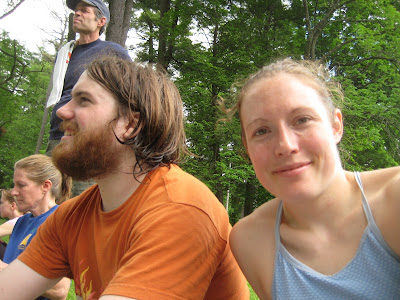 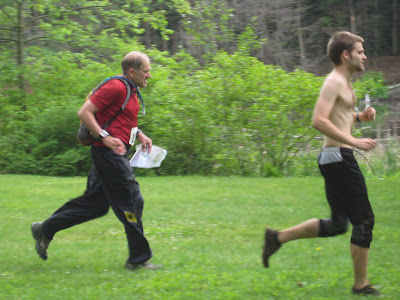 Ross' dad almost didn't make it - they do the awards right around 3.5 hrs, so that we can all cheer for the people who are cutting it close. Eric Smith was spotted at 3:27, so Ross ran over to pull him in to the finish, and he did it with 60 seconds to spare. 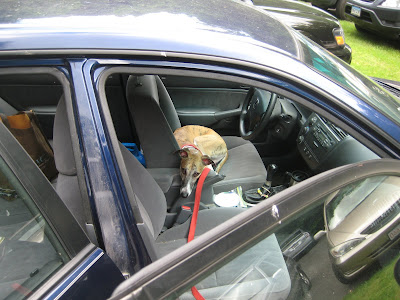 Presto after a long walk. I'll admit that my parking brake looked like a good pillow to me, too, after the run.

If I can't even dab mountain biking without taco'ing my ankle, I'd surely kill myself orieneering. I have to ask, what is that ankle contraption of which you question washability? I may need something like that when I get back on my feet again.

You can always look at it the other way around - if you orienteered, your ankles would get so strong biking would pose no challenge to them at all!

The object of questionable washability is a pretty light ankle brace, it has some metal struts along the sides but they don't do much anymore. You'll probably need something a bit more robust, at least for the initial part of your recovery. I recommend something with more velcro and fewer laces - this one takes forever to lace up tight enough.