I have done a lot of orienteering this spring, if that somehow escaped your notice (27 hours, 145km, and 352 controls of it). Enough orienteering, in fact, that I felt justified in showing up to the Team Trials races last weekend in Harriman, not because I thought I'd make the team, but because I wanted to see how I'd compare, and didn't think I'd be embarrassingly far behind everyone. There wasn't really any pressure on me to perform, because I did not have an A-meet ranking score, having only done two of those in the last six months, and you need at least three ranking scores to come up with a team ranking score, which meant each of the three team trials races would count as a ranking for me.

Saturday had both the middle distance and the sprint race, and the middle was probably the most technical thing I've ever run. It was still way better than some of my previous experiences at Harriman, but not at all what I'd call a good run. The splits on attackpoint claim I lost about five minutes to mistakes, and I think I lost another 1-2 minutes on just being hesitant and overly tentative. I never got running fast, which seems to be just what happens on middle distance races, but at least near the end I started to run more confidently, when Cristina caught up and I was trying to hold her off/pass her back. I didn't feel very good about that one, but thanks to a lot of other people making mistakes, I placed 7th (for the WOC-eligible runners, the Canadians all beat me), although 24% back. Arrrrgh. 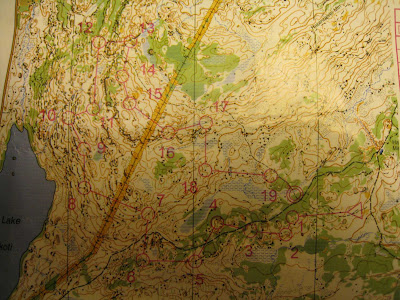 A horrible photo of the map. My scanner no longer works with the OS on my computer, so I stole this from Peter Gagarin, who had just taken a photo of it.

After a couple hours to recover, it was time for the sprint. I did a decent warmup, although I could feel lunch still bouncing around in my innards, and tried to focus my brain, not dwell on the mistakes from the morning. The scale of the sprint map really helped, and I ended up having a great race, flowing smoothly from one control to the next and always in control of my run. I could use some more leg speed helping me out, but the navigation was about as good as it gets for me, which was quite encouraging. Unfortunately, I was pushing so hard that I just never saw #15 on my map, causing me to completely skip it, and get disqualified. A huge bummer to run a good race and then blow it, but I was on such a high from navigating well and smoothly (except for that #15, whoops) that I just couldn't get mad about mispunching. 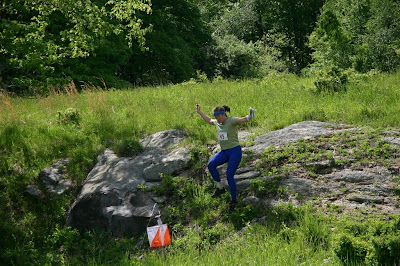 Coming in to one of three spectator controls - definitely still favoring the ankle a bit, but its otherwise healed. 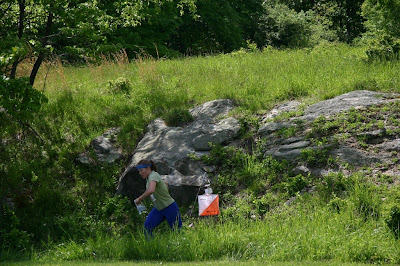 If we're going to play the woulda-shoulda-coulda game, had I not mispunched I would have been 6th, 10.8% back, definitely one of my better races. That course definitely favored the fast runners, maybe someday I'll get fast. 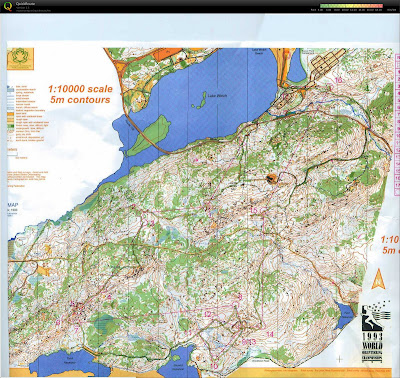 The long race was on Sunday. I decided that I would have a comparative advantage going into this, thanks to leftover skiing fitness, because I wasn't actually all that tired from the two races on Saturday. So, I attacked the course, and for the most part that worked really well, although I was definitely slowing down by the end. I have good endurance right now, but not very good speed or orienteering fitness - it takes a different skillset to be fast in the woods, and although I'm learning the tricks and getting better at it, I can't float through the blueberries like some more natural runners. Of course, I'm also not really training for that (or for anything at all), so its to be expected that I'd be slower.

I had a relatively clean run, some bobbles in the beginning, and then a really good middle section of the race as I was trying to stay away from two girls who were catching up. I might have been able to hold them off, too, had I not made a 3.5min error on #15, and by then there wasn't enough course left to make up much time. It was still a good run, with some good navigation, although to my chagrin I was 7th again. At least this time I was near the pack of Ali/Erin/Cristina (all named to the WOC team), if at the back of it.

The only part about this weekend that makes me sad is that the Team Trials races don't count for your A-meet ranking score, so the good points I got from Sunday's race don't go into my overall rank. But it was super fun to see everyone, hang out in the sun, and cheer on my friends and teammates who will be representing the US in Norway this summer! CSU named four to the team, so that was pretty sweet. (if you feel like seeing where I'd stand had I not DQ'ed the sprint, my sprint points would have been ~90, so the sum of all three races would have put me either tied or just behind Alison Campbell, the 3rd alternate).
Posted by Alex at 10:10 AM