Everyone else was off at the West Point A-meet this weekend, but with three weekends of racing coming up, I realized it was time to stay home, pay homage to the travel diet, and catch up on some spring cleaning. The cleaning part was pretty bad, especially on Sunday when it was 90 degrees, laundromats weren't made for that sort of weather. But it was good to lounge about, as much as I'm able to lounge about, and get my feet back under me. And clean some bikes. 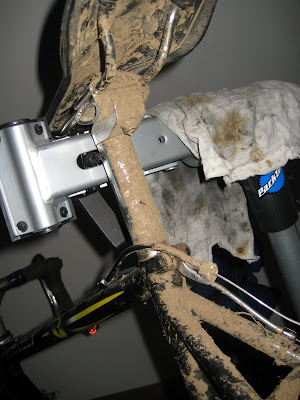 Yes, this is from ice weasels. Yes, that was in December.

Saturday was the first CSU practice of the year, followed by the newbie meeting and the training meeting. While Rob and Jamie talked to the parents, I took the noobs out on a run at Mt. Misery, across the street from Jim's house, where the meeting was being held. I should have known this would end badly when Jim said something along the lines of "Anne knows some loops in there, but I get lost every time". If Jim is getting lost, what hope does someone have who has never been there? I bravely led 13 noobs across the street, and we had a fun little jog, interspersed with some pushups, jumps, bounds, boofoos, and skips, and mostly everyone was able to keep up. It was a little scary when one of the girls had an asthma attack - she claims to not have asthma, but that might not be true after Saturday. I don't have an up to date red cross certification or anything like that, so when she started wheezing I was pretty scared. We sat down and slowly got things under control, but she was close to panic. It could have been really bad.

After that, I decided that she shouldn't run anymore, so sent most of the group back with Joe, one of the older noobs, in charge. Who puts a 14yo boy in charge of a group in an area that they've never been to? Luckily, they were all back by the time I and my two charges (the asthma girl and the girl who was having trouble keeping up) walked back. After getting lost. Whoops. I would not call this one of my more successful outings as a coach...
Posted by Alex at 7:22 AM

Mt. Misery is simple...there aren't even that many trails. Nothing like the Lincoln Woods area on the other side of the big field, I can get lost in there really easily.

We crossed a field. And ended up in someone's backyard eventually, and then in a different field with horses. A map might have helped...