The only racing action I've seen recently is on Thursdays, at the fast and furious park orienteering races. Two weeks ago was at Peter's Hill, in the arboretum, and last week was at Cat Rock park, in Weston. Peter's Hill was pretty brutal, as we had to go up the hill three times, and I found that my legs didn't want to cooperate on either the ups or the downs. This was just after four days of orienteering at Harriman, so you'd think I'd be all coordinated, but I made mistake after mistake, and my slow running couldn't keep up with my mistakes. I'll blame being tired. I ended up 10th for the day, but 32% behind Ross. Dang. 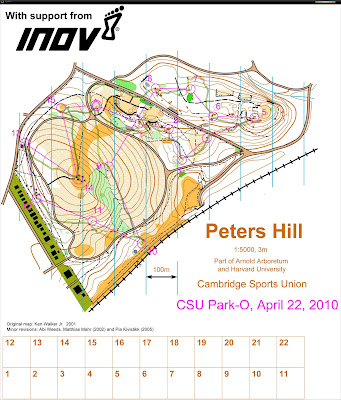 Cat Rock park was last week, and like Peter's Hill, it featured a big climb, that we went up, but only once this time. Unlike Peter's Hill, it was a forest sprint, so there was some actual navigating involved, which was nice. I was feeling pretty sluggish again, and my calves were still sore from the track workout two days earlier, so I incorporated a slower pace into my race plan. This worked wonders for not making mistakes, but my newly discovered navigational skills weren't enough to boost my sluggish running pace. I'm noticing a pattern - you mean I have to run fast and orienteer cleanly to do well? I also managed to be a doofus leaving 13 and leaving 14, which cost me ~2 minutes.

This time, I was only 28% behind Sam, who won, and I was fifth, although Ross and Brendan and SGB weren't there. Still not a great result, but at least it is an improvement. This week is at Pine Hill, in the southern part of the Fells, so hopefully my not-so-fast running speed won't be too much of a hindrance, since the woods are a little thicker there. I just can't keep up with the boys when its flat out trail running or open parkland. 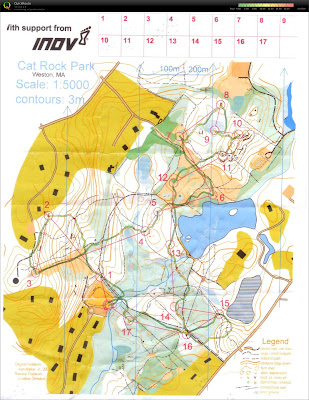 The garmin was a little off on this one - anywhere that the track is near a trail, I was probably actually running down the trail. And I didn't climb all those contours over by 15, I may be dumb but I ain't stoopid.
Posted by Alex at 2:10 PM