Ed has been on this kick recently of re-running the park-o races. I think we can both admit that its to try and beat my time =). Anyway, after last Thursday, I wasn't sure I wanted a re-run. Pine Hill is green and brambly at the best of times, and the early spring here means that now you can't quickly differentiate between nasty brambly stuff and just regular nasty green bits. This is important, because I will happily bash through the normal nasty green bits, but thorns stop me pretty quickly. Nothing like having strings of briars wrapped around your legs in multiple places - you get immobilized pretty quickly. Not pleasant. Anyway, Ed was prepared with carharts this time, and even I wore windpants instead of the usual spandex I choose for orienteering.

Last week's route is below. You can see my major mistake on the way to 11, but re-running the course made me realize that I made a couple minor mistakes along the way as well. 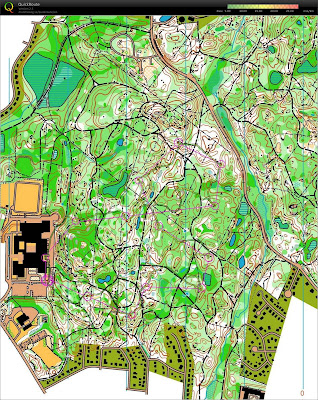 Splits from the two runs, with Bill and Sam having added their splits as well. The map below is my route from last night, although its a bit confusing, due to a couple fast laps around trails between 5 and 6... I didn't want to fight through all that green stuff, I thought intervals sounded more pleasant, so I ran around on trails for a bit until I was close to 7. 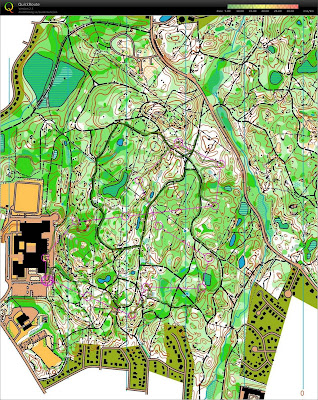 I guess its a bit hard to see the quickroute line over all that greenness. Anyway, I made a chart of where I was faster last night, to try and figure out more accurately how much time I think I lost. It should be noted that I wasn't running as hard last night, so anywhere I picked up time was definitely a better route. The red difference numbers is the time I lost the first time, blue is what I lost the second time.

From this, I can see that there were five splits where I was faster the second time 'round. The first control I took a better route second time - around on trails to the left, instead of through the fence. 2-4 I was a little shaky last night, with a blatant mistake at 2. 5th control I went out to the trails to the right, that was clearly faster.

I didn't visit 6, and 7 was part of my interval lap time, 8 I hugged the line a little closer on the second time, but was more hesitant - pays to run fast I guess. Then I went straighter to 9, instead of going down the trail like I did the first time, and this was barely faster. It was way faster (and more pleasant) to go out to the trail and back in to get to 10, and likewise way faster to go around on trails to 11. Then I got stuck in the brambles going to 12. Really wishing I had Ed's carharts at that point. The stuckness continued out to the trail to 13.

This was a pretty valuable exercise, but Ed ended up beating my time this time (although not my time from last Thursday!). From my analysis, I lost 3:07, and that doesn't count my hesitations on the way to 6 and 7 last time (~20s total). Had I been 3:27 faster, I would have been 5th instead of 6th, although of course you can't really compare like that when you're doing a re-run. Results from last week. How Ross ran that course in 22 minutes is a total mystery, he must not have any nerves left in the skin on his legs.
Posted by Alex at 12:04 PM