I was looking forward to the Blue Hills Traverse, because I thought it might go well, and be fun, but for whatever reason, a whole combination of reasons most likely, it was not fun. I actually haven't had that little fun in a race in years. I don't know why I didn't drop out, I guess its not in my nature to drop out of races. I had a glorious run of four years of no work-related stress, but school got hard the last couple weeks, and apparently I don't know how to deal with that anymore. The stress manifested itself in a pretty poor physical performance, and a worse mental one. I think my training log sums it up best, so I'm just reprinting that:

Terrible, horrible, no good, very bad day. Not so much the orienteering, although that was hardly great, but just sort of all the little things that were adding up and I couldn't get my head past them so all these little things built into an awful blur of miserableness, and all sorts of little things that normally wouldn't bother me were just too much. My body felt frail out there, wobbly ankles, tired legs, being whipped by branches stung more than it should have. The pointy rocks were particularly hard to deal with today, and for the effort I was putting out, I just wasn't moving at all. Brief second wind (although you can't really have a second wind if you never had a first one) when Bob L caught up, and I was like, shit, I better start running again. But then the downward spiral of self pity over nothings started up again, and I just couldn't kick my head back into cheery-land, by control 23 I was sobbing, what caused that was a particularly stingy whack to the face of a white pine branch, something that I normally wouldn't even notice, and I stumbled down the hill towards 24 unable to see much for tears and hiccuping and all that, no real reason for it. So then I went ahead and spent 15 minutes on #24, just sort of whining to the world in a pathetic little way about how much I was hating life and hating rocks and hating the terrain and hating the park and hating the map and hating the course and hating the sport. Luckily Bob caught back up at that point, so I started orienteering again instead of wandering in circles at a quarter-Sharon mumbling to myself and sniffling.

Going to take a break from orienteering for a bit until I can have fun in the woods again. It was fun once, right?

Also going to get my shit back together in the rest of life; I suspect stress played a role today. 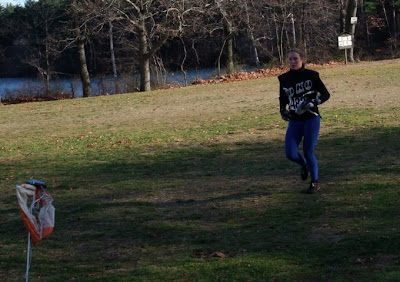 I feel like this facial expression sort of sums it up, as I jogged towards the finish...

Despite it being a time of year when I should be ramping up the volume, I need to back off from training until I can get the rest of my life in order. Working on that list of impending doom. Breathe in, breathe out, I hear that's how it goes!
Posted by Alex at 8:53 PM