NEOC was holding a meet this weekend, up at Breakheart Reservation in Saugus. All I know about Saugus is that they have a good sausage shop, Ed has been there, but we didn't go to get sausage, which was sad. The map was made in like 1980, so a couple things have changed, like trails and vegetation, but it was still mostly ok. The vegetation was thick, which I found unpleasant, but there were some nice parts of the woods to run through, so that made up for it. Unfortunately, my head wasn't really screwed on straight, and I made three distinct errors that all involved over-running something on a trail, and were all really stupid.

On my way to #4, I decided that I was too warm, and I would take off my headband and put it in my pocket. I came out of the woods and hit a trail, which I knew I had to follow for a little bit, so I jogged down the trail while putting the headband in my pocket. It took longer than I meant for it to take (clumsy race fingers), and eventually I zip up the pocket and take a look at my map, and I'm way past where I meant to be. D'oh! Lost at least a minute thanks to that little move, and more embarrassingly, Ed witnessed it.

A perfect case of braindead on my way to #12, I was running on trails, and I was on the right trail, but then I crossed a little stream, and I was like "wait, there aren't any streams that I'm supposed to cross! I must be on the wrong trail!" So, I turned around, and got all the way back to the first junction before I found the stream on my map that I was indeed supposed to cross, and had to turn around. Another minute, and this time, Lori witnessed that mistake.

Things went pretty well for a while, until I got to #14, which had also been #4, a butterfly control. I punched at the control, oriented my map, and merrily set off for #13 instead of #15. I was vaguely wondering why the terrain looked similar, but I was on the line, so not that worried, until a cliff appeared that shouldn't have appeared, and I realized what I had done. D'oh! Another three minutes. 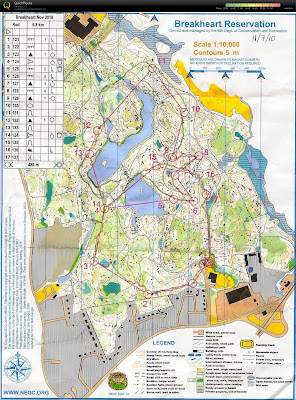 Somehow, the rest of the course went pretty well, and my knee felt fine running in terrain. I ended up 4th, and the first woman. Most importantly, I beat Ian, which I haven't done in well over a year. The whole recovering-from-a-stress-fracture thing might have slowed him down, but I'll take a victory where I can get it.
Results.

Next week I'm co-directing a meet for CSU, at Rocky Woods, in Medfield. All three of you who read this blog should be there (I guess the parental units can be excused from that order, its a bit of a drive).
Posted by Alex at 4:44 PM