Mt. Norwottuck and I have a rocky relationship. It started in 2005, when I did a Billygoat there, completely unprepared. I've talked about this Billygoat before, its the one known as the hardest Billygoat, with a 21% DNF rate, and only 48% of starters finished within the time limit. An inadequate breakfast and the first hot day of the year left me totally bonked and staggering around into trees. I was one of those overtime finishers.

I thought maybe Norwottuck and I could move past that rough spot in our history, especially now that I live out here, but it seems that area will always give me trouble. Last week, Ali and I headed out to work on moving smoothly through junky woods, and things were going ok until about #9 on the course we'd designed, where I just got totally thrown off, and couldn't recover. It was an ugly day, a bit of a soul-crusher; thank god it hadn't been a race. 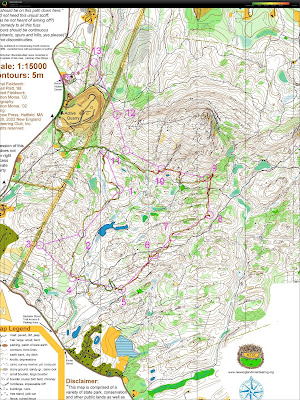 You can see how after I got to #10, I just gave up and ran home. All those pointy rocks, all those little pine trees in your way, it was just an unpleasant training session.

I thought I'd give it a go again this week, when Phil mentioned that he'd like to do some compass training. I set up a corridor course, where the map is all whited out except for a corridor of terrain between controls. The idea is to use your compass to go in the right direction. The penalty for leaving the corridor is pretty high, because there is no way to relocate. We didn't bring along a full map, which was silly, but there ya go. 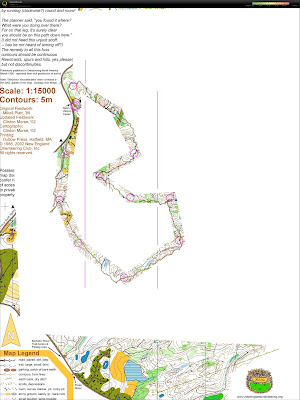 This went even worse than last week. I made a 5 minute error to #1; I'm actually quite impressed that I found it at all, after totally leaving the corridor. #2 was alright, but then I got pushed south by an expanded beaver pond on my way to #3, and never actually went to the right area. That is a danger when there is nothing in the woods, but anyway, that threw me off on my way to 4, and I was just moving waaaay too slowly, trying to make things match up. Just having so much trouble running. Luckily I figured out where I was, and got to the control location eventually.

Another minute or two evaporated near 5, I was in the right spot, but without being able to see the massive reentrants on my map, I just couldn't put two and two together until I'd relocated off the little lake. Sloppy sloppy. I tried to get my act back together on the way to 6, but was just moving so slowly, that I got depressed. I slogged on to 7, and then had to decide whether or not I wanted to bail, or keep going over the mountain. I thought about bailing, just because I wasn't having that much fun, but eventually decided to keep going, since it wasn't that much longer. Up to the top, and then I jogged down the trail, which was mostly in the corridor. Things were going well, and I was moving faster again, but then managed to completely overrun #10, ending up almost at the road. I took that as a sign that I should just go home, and stumbled back to the car to meet Phil, who had been waiting almost 10 minutes. Not a fun time, but hopefully somewhat valuable in using my compass more intelligently... We've decided that future trainings should be done as partner exercises, when we have a partner. Much more fun that way.

Time for more ski training and less orienteering training - I'm going to Sweden in three weeks!
Posted by Alex at 11:07 AM