I'm doing my best not to A) whine too much, and B) drink too much more coffee. This whole grad school thing started out so easy, and then all of a sudden, all the shit that had been getting a nice breeze from the fan fell into it. I spent two days last week attempting some fieldwork, luckily I had a very competent FS research guy come along, he's been showing me the ropes and it makes things much easier. It still involves wading in streams in November, why did I pick a project that was going to be both wet and cold? Anyway, the problem with being out in the field (my two sites are in the West River watershed, VT, and Westfield River, MA - neither of which are particularly close...), is that the entire day is lost to getting any work done. So, that has been piling up, and I might have to give up my agreement with myself to not do any work on weekends. In Ed's words, "they don't pay you enough to work weekends". Who would have thought that school could possibly interfere with my racing lifestyle?

So last weekend, instead of studying for an exam, doing problemsets, or finishing my thesis proposal, I helped Brendan put on an orienteering race at Rocky Woods, in Medfield MA. Ed basically took it over, printing the maps (all fancy-like, with color separation and other printing terms I don't even understand), running the e-punching, and setting out and picking up his share of controls. It was a pretty low-key event, but everyone seemed to like the courses that Brendan and I had set - he set the advanced ones, I set the beginner ones, and boy is it hard to set beginner courses when you're used to trying to make things tricky. 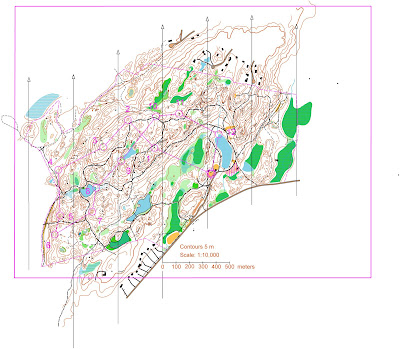 The orange course - hardest beginner course before you move on to the advanced courses. "intermediate beginner".

I went straight from the orienteering meet to Lincoln Sudbury Highschool, to help Rob coach a NENSA coach's clinic. It was mostly Bill Koch coaches, and as Rob put it, super important to teach them the right stuff to teach the kids who'll eventually end up with us. I was in a pretty foul mood driving over there, feeling guilty about leaving the meet early (thus not helping to pick up any controls), feeling pressure that I should be doing schoolwork instead of coaching, all sorts of stuff just sort of building to a head. Luckily, coaching relieved that feeling of impending doom, and I was smiling again by the end of it. There is really nothing quite so rewarding as coaching people who want to learn. Maybe teachers feel like that, too, but its something about moving that does it for me.

By Sunday I was only feeling small amounts of doom-impendment, and after coaching the CSU practice in the morning, and Corey in the afternoon, on a gorgeous sunny Indian-summer day, I was even in a good mood. Managed to actually do some studying for the exam, and then Ed and I spent something like three hours playing in the kitchen. We made dolmades. With other stuff. Quite tasty.

Monday is always too early, in this case even earlier because I wanted to arrive early enough to do some more cramming. 5am hurts, but it was worth it, as the exam was easy and I was still riding on an adrenaline high for most of the day, crossing off many of the impending-doom-list items.

Whee! Now to just not add anything to that impending-doom-list.
Posted by Alex at 11:04 AM